Talk of innovative ways of solving government agencies’ problems is plentiful, but often empty. Singapore shared services agency VITAL recently transformed talk into action with a hackathon aimed at generating fresh ideas, and it thinks other agencies could benefit by following its lead. GovInsider checked out the event. 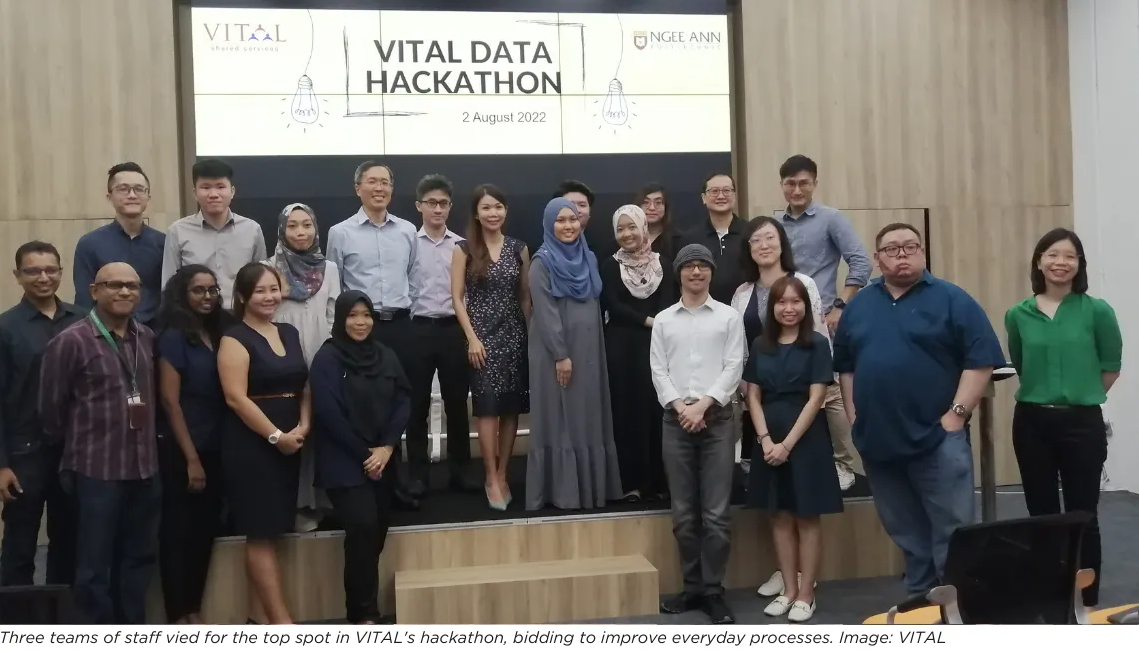 Mention the word “hackathon”, and a vision of geeks coding in a room illuminated almost solely by computer screens probably springs to mind. When I was invited to my first data hackathon – in this case an event organised by Singapore government shared services agency VITAL, which manages human resources, finance and procurement for more than 100 public sector organisations – that’s pretty much what I imagined.

How wrong I was. The hackathon I attended involved three teams of VITAL’s operations staff working with data to solve real-life business challenges. Near the end of the event, the teams got competitive, explaining how they had used data analytics to come up with solutions to address issues such as managing workflow processes and staffing challenges. A panel of judges evaluated their efforts and nominated one as the winner of the contest.

VITAL has long been using technology- and data-driven approaches for its operations. It told GovInsider earlier this year that technology was no longer just for IT types, but that it had evolved into a tool that all employees could use to enhance their work performance.

The data hackathon was a capstone event for the Certificate in Data Analytics programme that VITAL runs for its staff in partnership with Ngee Ann Polytechnic, VITAL Deputy Chief Executive Yuen Sai Kuan told me.

At the end of the four-month programme, each cohort takes part in the hackathon, at which they are presented with problem statements related to issues that VITAL is working on or challenges it is facing. Participants use data sets from VITAL and are asked to come up with ideas or recommendations to address those issues or challenges. 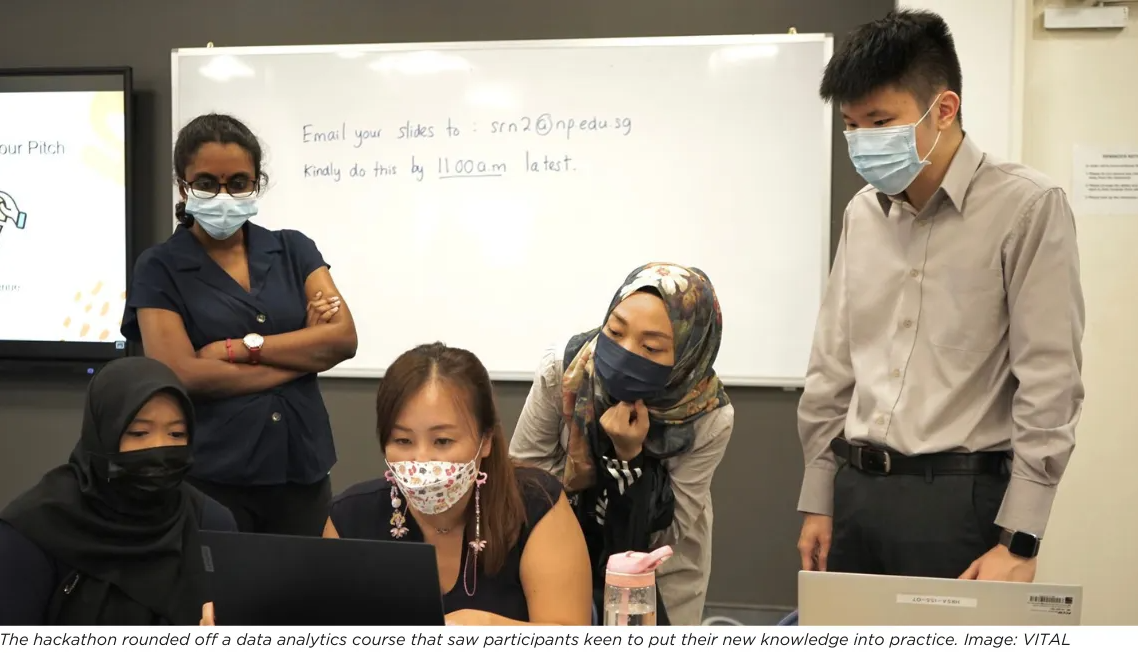 The agency has also rolled out a Specialist Diploma in Data Analytics for managers. The data analytics certificate and diploma programmes are both part of VITAL’s Shared Services Competency Framework, introduced to upskill its workforce in areas such as data analytics, robotic process automation and design thinking.

The data analytics certification and hackathon weren’t exactly a walk in the park for VITAL staff, as they had to juggle assignments with work, but they pushed ahead until the end, Kasmini Binte Kamsin, a member of the winning team, told me.

At the hackathon, VITAL staff could utilise the knowledge they had acquired to perform trial-and-error testing using data analytics tools to work out solutions for their assigned business challenges. They also developed teamwork skills as the hackathon teams comprised members from different parts of the agency.

The data analytics tools the teams used included Tableau, data visualisation software used to generate charts and bar graphs for data analysis, and the KNIME platform, which cleansed data for predictive purposes and improved its accuracy.

The winning team used data analytics to develop a means by which VITAL’s human resources department could equitably share the work of issuing letters of appointment for new recruits across all departments of the government.

Kasmini told me the team’s victory came thanks to its members being specific and concise in analysing data and drilling down to a granular level.

Yuen said the hackathon had generated new and innovative ideas for VITAL, one of which involved looking at peak and lull periods in the agency’s work cycle. He said it was useful for identifying periods during which it would be most suitable for staff to take leave, attend training courses and conduct team-building activities.

One of the hackathon teams also generated a data visualisation of the distribution of workloads across different departments, which Yuen told me offered useful insights that could help improve operations.

So, why choose a hackathon format? Yuen said it gave staff the opportunity to apply data analytics to real-world problems and situations. He said that before the event, he had received consistent feedback from programme participants that they were not sure how to apply what they had learned to their work in the office.

Yuen told me that other government agencies might benefit from using the hackathon model and other competitive, bottom-up means of generating fresh thinking. He said some agencies were using crowdsourcing tools to gather ideas and organising hackathons for members of the public.

“We should … see our own staff as another source of ideas, because they’re working on the actual problems that we’re dealing with,” he told me.

VITAL plans to follow up on the ideas that surfaced at its hackathon. The real-world challenges the teams worked on were submitted by some of the agency’s supervisors and the solutions presented during the hackathon will be relayed back to them. GovTech’s experimental tech development team, Open Government Products, has already accelerated the launch of products developed at their yearly hackathons, shared Director Li Hongyi with GovInsider previously.

“We’re interested to explore some of these ideas further and see how we can perhaps replicate them across the rest of the organisation,” Yuen said.

Yuen told me that in its early days, VITAL was a very transaction-heavy organisation, but that increasingly it wanted to go beyond such an approach to better support and add value to the partner agencies it serves.

To contribute added value to its partners, VITAL uses robotic process automation to reduce the manual effort expended on repetitive and menial tasks such as data entry. This cuts down on errors and ensures that the agency is better able to deliver services on time. The agency also hopes to be able to provide its partners with new business insights into some of the transactions it processes.

For instance, when VITAL processes transport expenditure claims on behalf of other agencies, it might spot a trend wherein staff regularly take taxis at midnight. Those agencies can then look into whether staff are taking taxis for work-related purposes or claiming fares for personal trips.

Yuen said: “Overall, we want to enhance the experience for the agencies that we serve to better support them in corporate services and through that, we have been transforming the image of VITAL.”

One agency, one hackathon exercise and one winning team, and many lessons on many levels. This may have been my first hackathon, but I have a feeling it won’t be my last.