OpenGov’s interview with CE on intelligent automation for public sector 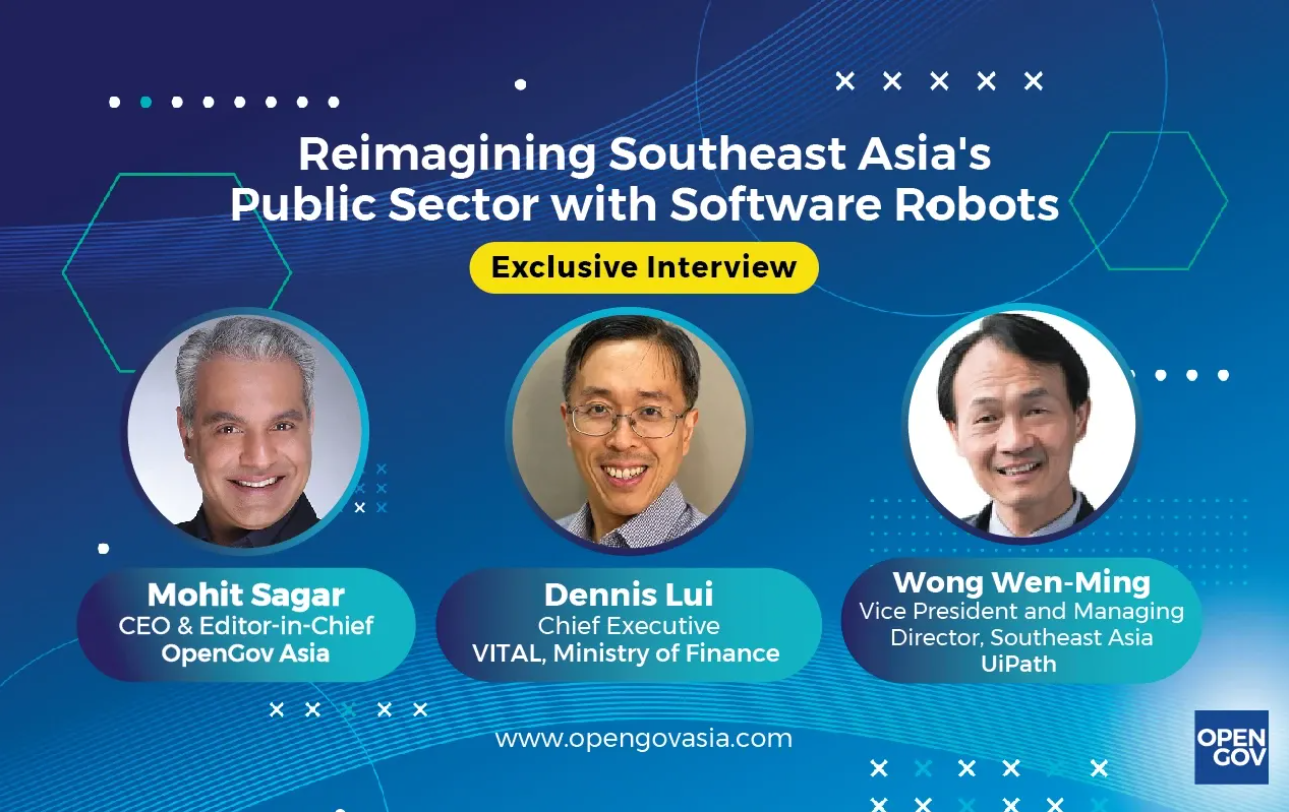 Intelligent automation (IA) has become the new norm for the public sector in today’s increasingly digital and tech-enabled environment. Automation in repetitive tasks allows businesses to increase their efficiency. However, next-level performance can only happen by applying intelligent automation across a gamut of duties.

The public sector typically deals with large amounts of manual, repetitive administrative tasks, which can take valuable time away from strategic work. Intelligent automation can be a game changer in improving service delivery, as VITAL, the Singapore Government’s shared services department has demonstrated.

Intelligent Automation for the Public Sector

According to Dennis, the challenge is how enterprises can prepare for the impending hybrid human-digital workforce. Moreover, there is a huge opportunity for software automation in the public sector that is currently untapped.

In embracing software automation, the Singaporean government’s shared services department has effectively freed up human resources for more creative and higher-order tasks while bettering services. VITAL has been leveraging software automation to realise its vision of every officer becoming a citizen developer, building robots for themselves and their colleagues using low- or no-code tools, from automating deposit creation to using AI to sift through resumes in the hiring process.

Dennis shared that the government is attempting to scale digital solutions despite facing numerous challenges. “Most government agencies are looking into or offering digital services to citizens and other stakeholders, but many of the problems they face are not technical,” Dennis observes.

Scaling digital is hard because strategy and decisions are made in silos, people are afraid to take risks, and there are not enough funds. Important to digital transformation in government is taking immediate action on these concerns, which can range from dismantling organisational silos to addressing digital skills gaps and a lack of resources. If left unaddressed, these key problems, though not technical, put digital government programmes at risk and make it hard to keep budget allocations and get the benefits that were promised.

Solutions have to be implemented to deal with these issues, such as governance frameworks, building culture and consensus across the organisation and improving digital skills.

As Singapore’s government adds more digital services, the country needs to come up with standards and guidelines to make sure that users have a full and consistent experience. “Standardisation is a very important thing to do.”

The Digital Service Standards (DSS) have helped agencies set up their digital services so they can meet the goal of the Digital Government Blueprint (DGB), which is to give citizens and businesses digital services that are easy, seamless and useful.

Data consolidation is a crucial step in the integration and management of data operations. It makes all data management information accessible quickly and readily and centralising all data boosts productivity and efficiency.

Robotic process automation (RPA) has quickly become one of the most important aspects, assisting businesses in increasing productivity and long-term success. Although RPA is only one piece of the modern business technology puzzle, it is frequently used as an introduction to the convenience and speed that automation can bring to a business.

With rules-based software robots performing repetitive operations that are typically marred by human mistakes, the government can provide a more efficient and accurate service to the public.

Flexible automation technologies are required for advanced manufacturing and assembly of discrete goods to increase production efficiencies and enhance product quality. This is especially true in the production of products with a diverse product mix and fluctuating production quantities.

Although industrial robots allow for a great deal of production and assembly flexibility, they lack the precision required for precise manufacturing and assembly operations.

People often say that the goal of public sector services is to serve the people, thus employees can be more productive and happier at work with the help of software robots. This is good for both employees and the company – and citizens.

Furthermore, automation not only makes it easier for the government to do its job but also makes life better for both employees and the public. As automation spreads through the public sector, it gives workers more time to improve how people interact with the government.

Dennis highlighted that as part of its RPA journey, VITAL has made a “bot library” with automation best practices and scripts for more than 100 Singaporean government agencies. Since 2017, the organisation’s digital roadmap has been built around automation. And VITAL has moved on to putting in place automation that works without a person present and adopting a citizen developer strategy.

He also shared that the goal of VITAL is for every officer to be able to build robots for themselves and their co-workers using low-code or no-code tools like UiPath StudioX. Having a tool for automation that doesn’t require much or any coding has helped VITAL scale automation faster.

The UiPath Platform is a good alternative for non-IT-trained officers who find it hard to learn the standard RPA developer software on top of their regular work. It is easier to learn than the standard software.

As part of a low-code or no-code solution, VITAL is starting to use citizen developers. When talking about scalability, it is how they can scale RPA with enough flexibility and agility.

In five years, he envisions using automation in the public sector by utilising an extremely powerful central north of the organisation that provides intelligent operation while providing extremely productive human resources.

How to Become a Fully Automated Enterprise

UiPath Vice President and Managing Director, Wen-Ming feels that any type of AI-enhanced software might be referred to be a software robot, especially if it includes machine learning and automates formerly manual tasks. Virtual assistants, expert systems and other chatbots are examples of software robots.

“This implies that many everyday programmes, such as spam filters and antivirus software, could be regarded as software robots,” says Wen-Ming. ” UiPath is a robotic process automation tool for large-scale end-to-end automation.”

The following are the four Pillars of a fully automated enterprise:

“These pillars are a response to real, material outcomes that we’re observing in the industry,” says Wen-Ming.

RPA can increase productivity to offer more accurate intelligence data as well as give users real-time access to financial data with reporting and analytical capabilities. It functions best when used with routine, rule-based processes that call for manual inputs. There aren’t many, if any, alterations needed to implement the automation because the software robot uses another programme UIs.

Governments are still struggling to balance their budgets and use their limited IT resources effectively, but technological advancements are enabling automation solutions to increase operational efficiencies. Digital transformation for all levels of government solves the problem of doing more with less by modernising government technology.

Along with the surge in developing technologies, constrained budgets, and overstressed IT, staff, new possibilities for government task automation have emerged, pushing operational efficiencies for governments of all sizes.

For the government, automation is not a novel technology. However, as process robots and artificial intelligence advance, workload automation is becoming increasingly important in streamlining work traditionally performed by government employees.

Public institutions throughout the world have struggled to handle citizen demands during the pandemic, such as the surge in calls to contact centres.

UiPath helped VITAL and other public sector organisations achieve their IT objectives. Some assistance with establishing virtual contact centres. Agencies can offer round-the-clock support with software robots. And robots can respond to many queries with personalised responses.

If a situation worsens, contact centre representatives are available to provide a human touch. As soon as citizens’ wants are addressed, their faith in the government grows, which strengthens the bonds between the two.

“RPA automation fits well into that overall goal, as does speeding up its revolutionary adoption across all ministries,” says Wen-Ming.

Automation was still relatively unknown in those early days, he says, “But through a virus programme that we implemented, we attempted to raise awareness of how automated automation can transform a business.”

Because VITAL is the public sector’s advisor and this is public information, Dennis and his team have been at the forefront of encouragement, according to Wen-Ming.

RPA automation knowledge should be embedded in polytechnics and universities. As they embark on this journey, consider the technology or business streams – when they graduate, they intend to work with RPA automation in mind.

Furthermore, Asian adoption and thinking outside the box are required. “Yes, and we provide the necessary technology and enablement to empower all ministries and agencies to scale.”

Wen-Ming recognises that the future of work is changing and software automation has emerged as the perfect solution. Hence, human workers can be freed from tedious and repetitive administrative activities by using digital workers on intelligent automation platforms to learn and execute human-like business procedures.

These simplify work procedures and, most crucially, provide human employees more time to complete work of greater value and to feel more purposeful both within the organisation and for themselves.

Building up the skills of employees will be important for businesses. Organisations’ education and training policies should encourage workers to learn automation skills that are in demand and give them chances to improve their skills so they can keep up with changes in technology.

“I think communication is critical communication, a form of raising the level of awareness that automation is going to be here to assist,” Wen-Ming is firmly convinced.

He emphasises the importance of ensuring that everyone is more productive and accurate and that they have more time to upskill themselves to do something much more strategic.

The entire mindset, acceptance, adoption and awareness are critical to ensuring that the workforce has embraced rather than resisted automation. The same with manufacturing process automation – it should be adopted by businesses as it will soon become a standard tool in the manufacturing industry.

Wen-Ming is optimistic about the role of IA, RPA and technology down the road. “I think three to five years from now – what I wish, and I think it’s going to happen – automation will go beyond just a robotic process. I think bots that mimic human thinking will become a part of daily life and, hopefully, help to build a better world.”